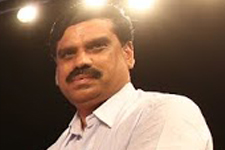 Currently the Circle Inspector of Kamakshipalya police station comes with 29yrs of experience. During his tenure as CI at Subramanyapura he was able to control crime rate especially against women and children. Currently as a station officer of Kamakshipalya, he has solved major dacoities, robbery and theft cases. He ensured free and fair elections during Lok Sabha elections in 2014 for Bengaluru Rural and Mandya parliamentary seats. During his tenure Kamakshipalya station has been awarded with Best station for the year 2013.