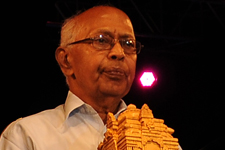 Award Category : The Namma Bengalurean of The Year 2013

At 78 years, Venkata Subba Rao is a retired RBI official, but remains unretired from social work. He works tirelessly fighting bureaucracy and corruption to fight for what is right. While most people give up their fights in days since they started, here is a gentleman who fought for two decades to save the Byrasandra Lake from being auctioned. Knowing full well as to where the city was headed in its water demands, his actions on saving the lake from being encroached upon by corruption and vested interests has ensured a step in restoring water security in the city. Relentlessly fighting the case and persevering till the end, he has truly dedicated his life towards the betterment of the city.