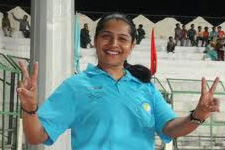 Anupama Puchimanda, a Homemaker, is the first ever Indian Woman Hockey Umpire to officiate the Junior World Cup & Common Wealth Games. She is also the first ever International Woman Umpire from Karnataka and first Indian Woman Umpire to officiate in 50 International Hockey matches. She was selected by the Federation International Hockey as one of the youngest Umpire among the 10 men & women in world in the year 2005. She has been Awarded the Best Umpire (Women) India by Sardar Gyan Singh memorial Hockey Society at New Delhi in 2007. She passed the SSB Short Service Commission exam (Non-Technical) ARMY in 1st attempt SSB Center, Bengaluru 2004.