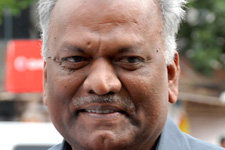 H Siddaiah, IAS is the Commissioner of the Bruhat Bangalore Mahanagara Palike. He was the first to introduce Three Wheelers who announced that they have come for collection of Garbage. He used BBMP vehicles to create awareness to the public and to the citizens about segregating the waste in the initial stage itself. Awareness was also created to the citizens through Road shows. He put up hoardings in prominent places and highlighted activities undertaken and to be undertaken by BBMP. He supported Councilors to solve the civic amenity problems in their Wards. He has implemented a program known as Jathas, which creates awareness on Information, Education & Communication programs with the successful cooperation of Honb le Minister for Urban Development, GoK, Local Corporators, BBMP officials, Public and students.